It amazes me I still knew how to log on AND figure out how to add a new post. I can’t even call myself a blogger anymore, that is how much of a slacker I am over here.

It makes me sad in a way, blogging used to be such a big part of my life – and now, it just isn’t. I think blogging was something I did when I had something better but not as exciting to do. Homework? Nah, I want to blog. Or blogging was an excuse to get out of the house. It gave me an excuse to go do things, to experience more, to say ‘yes’ more often. It was a way to document the little things that I otherwise would have forgotten if it didn’t show up on my TimeHop.

When I started to phase out blogging, I feel like a lot of my favourite bloggers were doing the same. Posts were getting more sporadic. No one was showing up as often as they were. But after signing on here again, I realized a lot of you are picking it back up again – not to mention Charlene, totally publicly peer pressured me to get my ass back in this chair and post something for me to read. So Charlene, this attempt to at least show up here a little bit more often is going out to you.

SO I guess you need a little bit of a catch up of my life?

And this kind of sucks. Because at this moment I realized how little there is to catch up on. Am I literally this boring? Fo’ realz?

I landed my dream job. It is amazing. I can’t say enough wonderful things about it. I work from home, so I have a pretty awesome desk area. Not as awesome as it will be when Jamie and I get our own house and I have a full room to decorate, but it’s still pretty awesome.

Jamie won season hockey tickets from the newspaper, and somehow I have been lucky enough to not attend one game. I am telling you – life is good.

I got glasses. Sort of. I was getting really bad headaches. Google told me I either had a brain tumour, or I needed glasses. I went to the Optometrist, who said my vision was fine, I just had some slight eye strain from staring at screens all day. So I have glasses, but they don’t have a prescription in them. They reflect blue light – so they are basically like sunglasses for my computer/tv/kindle/devices.

I still drink too many Monsters, and should own stock in Starbucks.

Really not feeling this season of Greys. I’m not a Meredith fan – I don’t like her drama. I need more Alex.

I signed up for the Reddit Secret Santa, which immediately just stepped up my ‘coolness’ on the ‘cool scale’. I kept going back and forth between national vs international partner – and decided to go international, because #MapleSyrup

I tried shawarma, and I loved it. It did hurt my stomach a little though, but I am hoping it was something besides the shawarma. I am yet to go back though.

Seriously, am I really this boring?

I guess so. That’s all I can really update you on to catch you up to speed.

“And I go back to watchin summer fade to fall, Growin up too fast and I do recall, Wishin time would stop right in its tracks” – Kenny Chesney “I Go Back”

I feel like a bad person; bad Canadian for that matter. One thing you don’t do is wish the summer away – YOU. JUST. DON’T.

It seems like since August 1, I have been craving the fall. I have been trying to suppress this craving, afraid for it to surface. I have no idea what it is, after all it is still pretty hot here. I think it must be from all the ‘back to school’ ads. Back to school = fall, even if September is still considered summer.

I can’t seem to wait for the dark nail polish, the hot lattes, the fuzzy socks, the cozy blankets, the cool mornings, the cinnamon, the pumpkins, the hot soups, Jamie intently watching football, soft pretzels, the yoga pants, the scarfs, the chunky sweaters. I. CAN’T. WAIT.

After all, it won’t be long before I am longing to be doing just that. Once fall comes, it is like we have 1 month of perfect weather and then it is just a burden.

“Sail away from the safe harbour” – Mark Twain

For the past few months Jamie has been obsessed with the thought of getting a boat. I never understood the whole ‘boating’ things. I own a pair a Toms and figured that was good enough.

The opportunity came for Jamie and his brother to purchase a boat and they jumped on it. They picked it up Monday, and Jamie has been smitten ever since.

Last night I was invited to go, and I apprehensively did – I even bought a boating hat! As I mentioned on Instagram, it was the first time I was on a boat which didn’t serve dinner while touring the harbour at sunset. And you know what? It wasn’t THAT bad. I still don’t really understand the ‘obsession’, but I got a lot of sun and reading in and that was pretty cool.

The boys had a wonderful time fishing, and they were kind enough to let me snap pictures quite often.

“We read to know we’re not alone.” ― William Nicholson

If you’ve been around awhile you will know I am a pretty big bookworm – I always have been. In high school I would go early to sit on the floor in front of my locker and read before class. Or if there was a spare moment in class I would be reading. Even in elementary school, I was constantly reading – winning monthly reading competitions. Even when I was way younger, I used to take my Dr. Seuss books and copy them out. I very much lived (and still do) in a world consumed with books. Books, books, books. They truly give me so much happiness and fulfillment.

However, I have reached a crossroads with my books. I had the idea to map the books I have read this year, and it was quite insightful. I created my own Google Map, and plotted where the author was born (or currently living if place of birth was not listed) as well as if they were of non-european decent.

This was quite eye-opening. A good 80% of the books I have read this year (100 and counting!!!) were from the US. I didn’t like that number at all – especially since only a handful of books I’ve read were by Canadian authors.

So I have started boycotting American authors – mostly. I am trying to read more diversely. I am trying to find a balance between getting better ‘well read’ and reading for pleasure. I think it is a definite fine line between the two – I don’t want to feel like I am back in school getting ‘forced’ to read books I really, really don’t like – I’m looking at you Animal Farm, boy did I not like you…

The problem I am facing is finding books which I am interested in, that are translated into English, accessible to Kindle, and preferably NOT long dense classics such as War and Peace.

Below is my map, and it is quite clear to see where I am lacking, mainly from Russia diagonally to South Africa..

So, to my Bookworm buddies….

* Do you have any favourite books I should check out by non american authors?

* Do you read diversely, or am I just overthinking this and should really just read what makes me happy?

“Remember to play after every storm.” Mattie Stepanek

I have a slight obsession with laundry. I love it. What I really love is putting wet laundry outside to dry. I usually will take drying racks out on the deck and put clothes on that, but the issues come when I want to dry my sheets. Since I am deprived of a clothes line I have to place them on the railing of the deck. I have learned through a lot of trail and error that I have to tie them to keep them in place. Otherwise, there have been a few times where I have looked outside and had to go retrieve my sheets off our neighbours tree – or maybe it’s our tree.. I don’t know where the property line really is.

Anyway, on Saturday I was so excited to get home, wash the sheets and put them outside. It was such a nice day. I tied them down and noticed there appeared to be a storm rolling in. I ran in the house, grabbed my camera and decided to take some pictures of it (yes with my sheets strapped down).

We have a neighbour who backs on to us, but a few houses down who loves to watch us. He angles his lawn chair and just stares. Yes it’s creepy, yes we realize he is crazy, but we deal.

He bellowed over to me instructing me to take my laundry down because if I couldn’t tell – there was a storm rolling in. I explained to him, since I am obviously going to have to put them in the dryer I really don’t care if they get wetter or not.. And then he proceeded to watch me photograph.

And just like that, another month is gone. May was a busy month!

It started off with Jamie going away for a weekend for a lacrosse tournament, which caused me to discover a cute little walking trail which I seem to go to a lot now. The obvious books, Starbucks, and Tim Horton’s obviously made their appearance as well. We were blessed with a whole lot of sun and nice weather – up until a few days ago. It was a pretty decent (but busy) month!

“When you stop expecting people to be perfect, you can like them for who they are.” – Donald Miller

Lately I have been enjoying/getting more comfortable taking pictures of random people I see. It is kind of a weird thing to do; it makes you feel like a creeper – taking someone’s picture without them knowing..

The more I do it, the more comfortable it gets. But I have reached a problem. I don’t really know what to do with the pictures. They turn out so wonderful, but they are useless to me (I can’t just print them off and frame it.. like I could, but who wants pictures of random people in their house?)..

Jamie suggested I make a photo book compiling all the pictures. So far it is the best idea we have… Ultimately I guess I could always go up to them and tell them I took their photo and ask if they want me to send it to them, but that seems stranger than taking their picture… I guess we will see what I end up doing.

Below are my favourite candid shots of people who didn’t know I was taking their picture.

There was an error retrieving images from Instagram. An attempt will be remade in a few minutes.

Blast From The Past 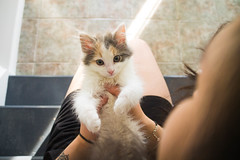 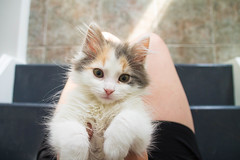 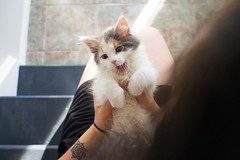